The Legislature’s Joint Finance Committee continues to vote on items in Governor Scott Walker’s $69 billion proposed budget. Here is a transcript of testimony I delivered on the Governor two-year plan for 20013 and 2014 at the Madison budget hearing held at Black Hawk Middle School in Madison on April 23, 2013. A number of Democratic State legislators were present, including Senators Miller, Larson, Risser; and Representatives Taylor, Sargent, Herbl and Kahl. About 50 members of the public were in the audience when I gave my remarks at approximately 6:30 PM. Other people were giving testimonies when I arrived. Everyone I heard either criticized the governor’s proposed K-12 school voucher plan or criticized the failure of the governor’s budget to ensure adequate health for all Wisconsin’s residents, especially its most vulnerable the low income residents.

“The governors proposed budget for 2013 and 2014 fails to adequately fund 2 areas which I believe are critical for Wisconsin’s future. These are 1) education of the state’s children; and 2) Wisconsin’s contribution to global warming and responding to the global warming threat.

“To adequately address K-12 education, the budget should restore the $400 million in cuts made during the Governor Doyle administration, and the $750 million cuts made in the first year of
Governor Walker’s administration. Wisconsin’s public school programs should NOT be sacrificed fund a private school voucher program. The source of the money to restore and properly fund our public schools should not come from higher property taxes but rather from income taxes and the million of dollars that would unwisely expand the state’s highway system.

“This leads to my second major concern with the state budget, which is that it fails to address the growing threat of climate change in Wisconsin and our state’s continuing contribution to the rising concentrations of greenhouse gases in our Earth’s atmosphere from burning fossil fuels. To address this, the budget should fund a program that offers financial incentives to Wisconsinites for driving less (or not driving at all), flying less (or not flying at all), and who use less fossil fuel derived energy in the household per person, annually.

“Finally, the state should also fund a program for local governments to prepare and adapt to the changing climate caused by global warming.” 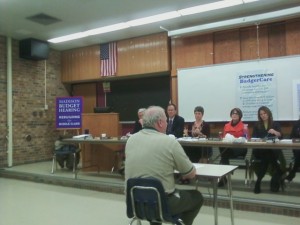