Cyclone Pam Is Just the Start 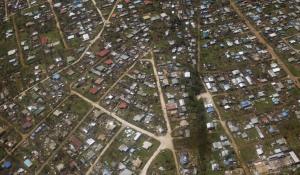 In the wake of island nation Vanuatu’s devastation by Cyclone Pam, in which 320 mile-per-hour winds killed dozens of people and destroyed 90 percent of the buildings in the capital city of Port Vila, public health experts fear that the country’s ruined infrastructure will result in mass starvation and epidemics of disease.
An aerial view of the destruction after Cyclone Pam hit Port Vila, capital city of the Pacific island nation of Vanuatu, on March 17, 2015. EDGAR SU/REUTERS

As the rate of global climate change continues to increase, such tragedies will become more and more common around the world. Vanuatu is not alone. New Yorkers, for example, received a dire warning recently from the New York City Panel on Climate Change: Sea levels and temperatures have risen dramatically over the past few decades, and that rise will only accelerate more rapidly in the coming years, putting the city at serious risk for flooding.

According to the report, mean annual temperatures have increased 3.4 degrees Fahrenheit in the past century, precipitation has increased 8 inches over the same time period, and sea levels in New York City have risen over a foot, which is twice the global rate of rising.

While these changes in temperature may seem insubstantial—none of us might notice, for example, if room temperature changed by a few degrees Fahrenheit—these changes have enormous implications for the environment and its inhabitants, particularly humans.

As a result of climate change that has already occurred, we are now experiencing more powerful storms, resulting in more city damage. In Brooklyn, thousands of families were displaced by Hurricane Sandy, which flooded entire neighborhoods and ruined many homes, some of which have not been rebuilt. Worryingly, many experts now believe that a worse storm could occur within the next few years.

We cannot allow this to continue. The problem of global climate change requires a global solution. We must work with other nations and their people to support the development of renewable energy and to reduce emissions of carbon dioxide that contribute to drastic changes in our climate.

We already have much of the technology we will need. We have electric cars, commercially available in the United States at prices that decrease every year. We have wind turbines and solar panels, which continue to increase in capacity. None of these policies will, by itself, reverse the effects of climate change. But a flexible approach to the problem, in which we consider all of the possibilities, offers us considerable hope for the future.

This flexible approach to climate change is not a Republican or a Democratic idea. Regardless of our partisan affiliation, we all have a responsibility to protect our earth and its people, as well as a profound concern for the generations that will follow us.

Yet today there are still dinosaurs roaming the halls of Congress, who insist that we burn fossil fuels, and nothing other than fossil fuels, to produce our energy, a policy that will only exacerbate the problem.

Despite the challenges that exist, we remain optimistic. The women and men determining national policy on renewable energy and climate change are ultimately elected. If we raise our voices and organize on behalf of the broad interests of society as a whole, rather than the narrow interests of fossil fuel producers, we will influence the debate of climate change and elect leaders who are committed to this effort.

As the United Nations this year brings together representatives from every country to work toward a solution that accounts for the different needs of nations, we have a real opportunity to lead that process. President Barack Obama’s historic agreement with Taiwan and his recent trip to India, to emphasize and commit to greenhouse gas emission reductions, have the potential to provide a model for the entire world. This is an all-hands-on-deck approach to developing policies that reduce our dependence on fossil fuels and expand our capacity to create energy from renewable resources. No one is exempt.

We encourage you to demand action from your elected officials on this issue. We have the ability to mitigate the effects of climate change. We need only the resolve to act. Now is the time.

Yvette Clarke represents the 9th Congressional District of New York and serves on the House Energy and Commerce Committee. Dr. Michael Shank is director of media strategy at Climate Nexus and an adjunct faculty member at George Mason University’s School for Conflict Analysis and Resolution.