Congressional Action or Inaction on Impacts of Climate Change on Undeveloped Countries?

If carbon dioxide (CO2) was as visible as the colors of Old Glory, the color of the sky would be predominantly red, white and blue. That’s because over the last 100+ years, the United States has contributed more CO2 to the atmosphere (now considered a pollutant since additional CO2 adds to the atmosphere’s “greenhouse effect”) than any other of the world’s countries, including China.

None of the CO2 and other greenhouse gases emitted to the atmosphere from fuel burning the world over escapes the atmosphere to become outerspace; rather, it becomes part of the mix of gases already present tin the atmosphere for hundreds of years, making for an ever stronger greenhouse effect over time. And because the heat is latent in its expression, the warming effect of the combined total of all additional greenhouse gases emitted to the atmosphere during the first 15 years of the current century has not been fully realized. The warming effects of the first 15 years of this century are mostly the result of increased fuel burning in motor vehicles and jet air travel the period 1970 – 2000, along with burning coal and natural gas in electricity providing power plants.

Although China has recently surpassed the U.S. in estimated annual CO2 emissions, the U.S. is still considered the world’s largest historical emitter of CO2. The CO2 concentration in the atmosphere is important since any additional CO2 released to the atmosphere by fossil fuel burning adds to the strength of atmosphere’s greenhouse effect over time, adding to what would otherwise be a background concentration level of roughly 250 parts per million (ppm) in the atmosphere, the CO2 level present in the atmosphere prior to the initiation of wide spread fossil fuel burning which started during the Industrial Revolution. The presently now new globally averaged level of 400 ppm in the atmosphere is higher than at any other time in Earth’s history when humans were documented as being present. This is why the undeveloped countries of the world believe the United States has a special obligation to help their people cope with the impacts of the changing climate on them.

Pope Francis pointed out in his encyclical on ecology that it is the world’s poor who are bearing the brunt of climate impacts. As Americans, and as people of faith, we are obliged to advocate for those whose lives and livelihoods are threatened, and who cannot advocate for themselves.

The Green Climate Fund was conceived to help poor and vulnerable countries adapt to the unavoidable impacts of climate change like changing weather patterns, sea level rise, and extreme weather events while building more resilient societies. More than 30 countries have pledged $10.2 billion to get the fund up and running. President Obama has pledged $3 billion from the U.S., and requested the first installment of $500 million in this year’s budget. The U.S. Senate needs to deliver on that promise! 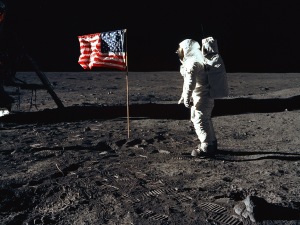 Old Glory saluted by first man on the moon.