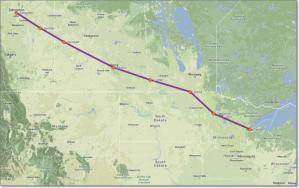 The State of Wisconsin, which has already issued a Wisconsin Department of Natural Resources permit to the Enbridge Company to increase the capacity of its pipeline across Wisconsin, to transport up to 1.2 million barrels of tar sands oil a day, will hold a contested case hearing on March 23, 2016, in the hearing room at the Wisconsin Division of Hearings and Appeals, 505 University Avenue, Suite 201, Madison, WI, at 9:00 am.

The tar sands oil, some of which is already being pumped through the pipeline, originates from the tar sands mines located in Alberta, Canada where the product is processed, is also believed to contain significant quantities of flammable additives which make the product fluid so that it can be pumped through the pipeline. The fluid of additives is then returned to the processing site in Alberta, Canada via an adjacent pipeline for reuse.