The first Earth Day, April 22 1970, instigated an environmental movement that numbered over 20 million people, all ages, socioeconomic status and 193 countries and lead to the adoption of numerous federal and states laws and funding programs, man y to help fund local municipal to makes cities healthier.  Watch it! CBS and Walter Cronkite tell it like it is.

Our planet is deeply in peril. Despite warnings from the scientists as far back as that humans continuing to conduct The extreme weather this year around the world, including the U.S., and the continuing smashing of longtime weather and climate records over the bast two decades, such as record ice melting at the poles and Earth’s many mountainous glaciers, have demonstrated the direction our planet is heading. It’s no longer in doubt we humans are the cause. But our federal and many state governments (Wisconsin being one of them.) have continued refuse to acknowledge

But only a few scientists will publicly say it since that would make them “doomsday scientists” who are considered not credible. Or they would be silenced and prevented from speaking freely about the subject of Earth’s atmosphere exceeding its limit of greenhouse gases before the cascades in nature cause worldwide calamities and destruction.

EPA Climate Scientists prohibited to speak at this week’s National Estuary Program in Rhode Island. This silencing of federal scientists on the subject of global warming and its consequences has been going on upwards of 17 years, when my brother, Patrick J. Neuman – a long time and respected National Weather Service (NWS) flood forecasting employee of the federal government, responsible for forecasting flooding in the Midwest states, including Wisconsin and Minnesota where he and his family lived.
Pat spoke out often about his growing concerns regarding the consequences of human caused global warning in his conversations with other coworkers and his supervisors in 2000. But when it came to presenting his information to the public at the NWS’s presentations at the Mall of America in early 2000, “higher ups” at the NWS prohibited from going and participating in the program.

He was subsequently told to pack up his things and vacate his office in Channhassen. Minnesota, where the National Weather Service Midwest Regional office is located, 6 months before he was eligible for his pension. However, the next day, NWS officials realized Pat had filed a notice of discrimination action (based on religion) which the NWS had failed to act on. They subsequently allowed Pat to work at home for the remaining 6 week period so he would not lose his pension, provided he sign a nondisclosure contract that kept the NWS blunder secret. 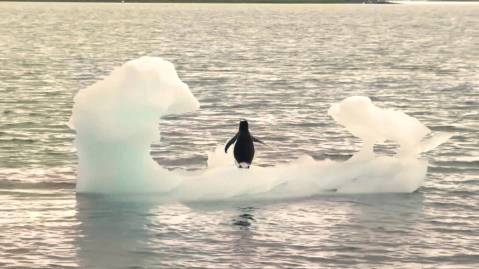 A new study in the journal Nature Geoscience found that warm ocean water is melting Antarctica’s ice sheets from below, contributing to sea level rise. Most of the observed melting is in West Antarctica, where more than 20 percent of the ice sheet has retreated across the sea floor. The study cited satellite data that show more than 10 percent of the continent’s glaciers are in retreat—as opposed to less than 2 percent of glaciers that are growing. If all of Antarctica’s ice melted, worldwide sea levels would rise by about 200 feet.