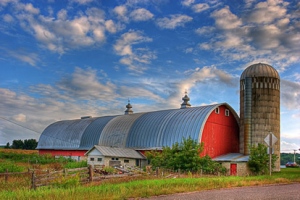 Agriculture has been a critical dimension of Wisconsin from early settlement and the logging era, through industrialization, and remains an important economic, social and cultural component of the Dairy State. Wisconsin ranks first nationally in cheese production, and second for milk and butter production. Yet Wisconsin is also second in milk cows, oats, carrots, and sweet corn used in processing. It remains the national leader in processed snap beans, cranberries, corn for silage, mink pelts and milk goats. It is also among the top five states for important agricultural commodities such as potatoes, maple syrup, mint for oil, and cucumbers for pickles.

Continue global warming is predicted to bring increases in both the frequency and the severity of droughts and floods, resulting in increased challenges for Wisconsin farmers and livestock operations. Warmer water temperatures are also likely to cause the habitat ranges of many fish species to shift and disruption of ecosystems already stressed by human activity. Overall, climate change in Wisconsin resulting from global warming will make it more difficult to grow crops, raise animals, and catch fish in the same ways and places as in the past.

Changes in the frequency and severity of droughts and floods could pose challenges for farmers and ranchers. Meanwhile, warmer water temperatures are likely to cause the habitat ranges of many fish species to shift, which could disrupt ecosystems. Overall, climate change could make it more difficult to grow crops, raise animals, and catch fish in the same ways and same places as we have done in the past.

Heat waves, which are projected to increase under climate change, could directly threaten livestock. A number of states have each reported losses of more than 5,000 animals from just one heat wave. Heat stress affects animals both directly and indirectly. Over time, heat stress can increase vulnerability to disease, reduce fertility, and reduce milk production.

Drought may threaten pasture and feed supplies. Drought reduces the amount of quality forage available to grazing livestock. Some areas could experience longer, more intense droughts, resulting from higher summer temperatures and reduced precipitation. For animals that rely on grain, changes in crop production due to drought could also become a problem.

Climate change may increase the prevalence of parasites and diseases that affect livestock.The earlier onset of spring and warmer winters could allow some parasites and pathogens to survive more easily. In areas with increased rainfall, moisture-reliant pathogens could thrive.

Increases in carbon dioxide (CO2) may increase the productivity of pastures, but may also decrease their quality. Increases in atmospheric CO2 can increase the productivity of plants on which livestock feed. However, studies indicate that the quality of some of the forage found in pasture lands decreases with higher CO2. As a result, livestock would need to eat more to get the same nutritional benefits.

The negative effects of climate change will be exacerbated by continuing declines in the acreage of Wisconsin farmland. Wisconsin lost more than 620,000 acres of farmland from 2007 to 2012, a 4% decrease according to the Census of Agriculture, which is conducted every five years by the U.S. Department of Agriculture. Likely causes of these declines are urban sprawl development, enabled by federal, state and local highway expansions which replace vegetation and topsoil with heat-absorbing Portland cement or asphalt in order to facilitate continued growth in motor vehicle driving (more fossil fuel burning) and more employment and profits for the construction and bridge building industry.