Divest from Fossil Fuel Industry or Suffer the Consequences

The following text is written by Lisa Neff and Published in Wisconsin Gazette.com, July 24,2014:

Over the Barrel
Activists champion efforts to divest from fossil-fuel industry. 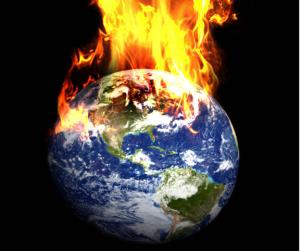 Meet Planet Enemy No. 1: The fossil-fuel industry.
And meet the new sheriff in town: The growing movement to divest ownership of fossil-fuel stock.
The divestment concept is not without precedent. In the 1980s, people around the world withdrew support from companies — and more than a few artists — who did business with South Africa. The campaign spread from college campuses and eventually 155 campuses, 80 municipalities, 25 states and 19 nations took economic action against the apartheid regime. Archbishop Desmond Tutu has said the end of apartheid would not have come without international pressure, specifically “the divestment movement of the 1980s.”

Today, the Nobel Peace-Prize winner has called for an “anti-apartheid style boycott of the fossil fuel industry.”

Christiana Figueres, executive secretary of the United Nations Framework Convention on Climate Change, also endorsed the movement in a speech in May at St. Paul’s Cathedral in London.

“The scientific data on climate change is overwhelming, the experience of the affected overpowering. The few who still deny the science and argue for inaction of course have the right to hide their face in the sand, but the sand is warming rapidly, and they will soon have to face their children,” Figueres said.

She had praise for others: the institutional investors moving capital away from fossil fuels, the parties involved in the development of a “fossil free” investment index, the creation of a global finance lab in London and the activists in the campus and church campaigns driving divestment from fossil fuel assets.

That movement, according to GoFossilFree.org, has resulted in commitments to the going fossil-free campaign from 11 colleges and universities, 37 faith-based groups, 26 foundations, two counties and 28 cities. Included on the commitment list are the First Unitarian Society of Milwaukee; Dane County, believed to be the first county in the United States to support the fossil-fuel movement; and Bayfield and Madison, among the first cities in the U.S. to adopt divestment resolutions.
Monona could join the league. The city sustainability committee unanimously approved a proposed resolution earlier this month that the city council is expected to take up this summer. The resolution, which doesn’t go as far as activists had hoped, would set as priorities the reduction of fossil-fuel consumption in municipal operations and the education of residents and business owners about “the importance of reducing carbon emissions from fossil fuels.” The resolution also suggests a variety of ways to work toward that goal,” including shareholder advocacy, fossil fuels divestment and reinvestment in renewable energy.

“I’m very proud of Monona for taking this step to not only acknowledge the reality of climate change but to take action on reducing its own fossil fuel use,” stated Monona resident Beth Esser. She’s co-coordinator of 350 Madison, an environmental action group at the forefront of the movement in the state.

Esser added, “This resolution solidifies the city’s commitment to addressing the harsh realities of our need to quit using fossil fuels if we want to preserve a livable future for our children and our grandchildren.”
Fossil-free advocates also are campaigning throughout the University of Wisconsin system, on the campuses of private schools such as Carthage College and Lawrence University, and for changes in the state retirement fund.

Campaigners in some cases want a pledge that institutions or foundations will freeze any new investment in fossil-fuel assets and divest within five years. Others are promoting resolutions to support the cause, which received a nod from President Barack Obama in mid-June, when he told graduates at the University of California-Irvine, “You need to invest in what helps, and divest from what harms.”

Divestment advocates maintain that math is crucial to the argument for going fossil free. The fossil fuel industry has enough coal, oil and gas reserves to produce, if burned, 2,795 gigatons of CO2, according to the Carbon Tracker Initiative, a team of London financial analysts. That’s five times more CO2 than can be released to maintain 2 degrees of warming. And most governments agree that any warming above 2 degrees Celsius would be unsafe.

“The fossil-fuel industry’s business model is built on using up reserves that should not be used. We cannot invest in this recklessness,” said Gregory Ercherd, who is involved in the fossil-free movement in Portland, Oregon. “We have moral, ethical obligations to divest from fossil fuels.”
“And we have a spiritual obligation,” added Ercherd, observing the surge in support for the movement this summer among religious institutions. The Unitarian Universalist General Assembly voted to divest. The University of Dayton in Ohio became the first Catholic institution to join the movement. Quaker, Lutheran, Presbyterian and Episcopal denominations have voted to divest. And, in early July, the Central Committee of the World Council of Churches, a fellowship of more than 300 churches in 150 countries, endorsed divestment.
“This is a remarkable moment for the 590 million Christians in its member denominations: a huge percentage of humanity says today ‘this far and no further,’” McKibben said after the vote.
Serene Jones is president of the Union Theological Seminary in New York City, which is committed to divesting its $108.4 endowment of fossil fuel funds. She said earlier this month, “Scripture tells us that all of the world is God’s precious creation, and our place within it is to care for and respect the health of the whole. As a seminary dedicated to social justice, we have a critical call to live out our values in the world. Climate change poses a catastrophic threat, and as stewards of God’s creation we simply must act.”

Portfolio for the planet

“There’s no threat greater than the unchecked burning of fossil fuels,” according to Bill McKibben, leader of the environmental grassroots movement known as 350.org.

“The (fossil-fuel) industry alone, holds the power to change the physics and chemistry of our planet, and they’re planning to use it,” he wrote.

Earlier this year, 350.org and two asset management firms — Green Century Capital Management and Trillium Asset Management — released a guide people through divesting.
“Since fossil fuel corporations are determined to burn their carbon reserves, which are five times the amount that scientists say our planet can safely absorb, there is a growing concern that investors may face a ‘carbon-bubble’ if carbon restrictions are put into place,” said Leslie Samuelrich, president of Green Century Capital. “With so many unknowns in the future, why not avoid the widely reported possible risk of stranded assets?”

“Actions taken by individuals and municipalities to transition away from fossil fuels send an important message to industry and political leaders and encourage further efforts regionally nationally,” said Adam Gundlach, a Monona resident and fossil-free advocate. “The transition becomes a reality with each decision we make and each step we take toward a sustainable existence.”

Some other resourse on the Web:

WHAT IS DIVESTMENT? It is the opposite of an investment. It is getting rids of stocks, bonds, investment funds.

WHAT DOES THE DIVESTMENT MOVEMENT WANT? For institutional leaders to freeze any new investment in fossil fuel companies and to divest from direct ownership and any commingled funds that include fossil fuel public equities.

HOW CAN DIVESTING IMPACT MULTI-BILLION DOLLAR COMPANIES? The top 500 university endowments hold nearly $400 billion. Plus, there are state pension funds, as well as investments from churches, synagogues and mosques.

INVESTING IS ABOUT MAKING MONEY. IS DIVESTING RISKY? Fossil fuel companies, presently, are extremely profitable. But they also can be risky investments — energy markets are volatile and their business models rest on emitting more carbon into the atmosphere than civilization can handle.
Connect with the reporter.