Enbridge asks Wisconsin to Approve Another Segment for Oil Pipeline 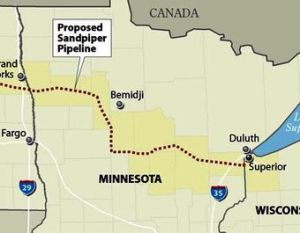 According to BismarckTribune.com, a 14-mile section of Enbridge Energy company’s “sandpiper” oil pipeline project could be built in northern Wisconsin. Enbridge Energy have reportedly asked Wisconsin officials to approve the final piece of its 610-mile project.

The company said the $2.6 billion Sandpiper pipeline stretching from North Dakota to northwestern Wisconsin will give Midwest refiners greater access to domestic oil. Enbridge has said it needs approval for a 30-inch underground pipeline and that it wants to begin construction on it in 2016. The proposed project would transport 375,000 barrels of crude each day.

North Dakota officials have already approved their state’s section of the pipeline, while officials in Minnesota and Wisconsin are still reviewing the proposal. County boards in Dane, Jefferson and Wood counties have voted in opposition to the project, or have asked the Department of Natural Resources to conduct a full environmental analysis.

Enbridge’s preferred route would affect nearly 120 acres of wetlands in a region that’s vital for migrating birds and animals around the western tip of Lake Superior.

Several groups have expressed concern about Enbridge’s track record, which includes spills in Michigan and Wisconsin. A ruptured Enbridge line spilled nearly 850,000 barrels of oil in the Kalamazoo River in 2010. Two years later, 1,200 barrels spilled near Grand Marsh in Adams County. A barrel is 42 gallons.

Jeffrey Wise, assistant administrator for pipeline safety at the U.S. Pipeline and Hazardous Materials Safety Administration, said the pipeline was “hazardous to life, property and the environment” because of Enbridge’s failure to take corrective measures to ensure safety.

An Enbridge spokeswoman said the company has spent $4 billion to improve prevention, detection, emergency response and new technologies within the past two years.

The Department of Natural Resources will hold a public hearing on Aug. 25 to discuss potential environmental consequences of the pipeline. A second hearing will be held after the department conducts an analysis.

Over the objections of the Calgary-based pipeline company, the state Public Utilities Commission (PUC) unanimously agreed to study a southern route proposed by a state agency to avoid the headwaters of the Mississippi River and a large swath of lakes, wetlands and wild rice areas.

The $2.6 billion project is designed to bring North Dakota crude oil to Enbridge’s terminals at Clearbrook, Minn., and Superior, Wis., and promises more than 1,500 temporary construction jobs and the potential to reduce the amount of oil moving on trains.

Regulators didn’t toss out Enbridge’s original plan, but decided that one suggested by the Minnesota Pollution Control Agency deserved to be studied as a potential alternative. That review will take months, and the final choice of routes won’t happen until next year.

The decision on Thursday came after five hours of testimony from various interests, including environmental groups who oppose Enbridge’s plans and unions who wanted no further delay. About 45 anti-pipeline activists protested outside the commission’s office in St. Paul before the hearing began.

“It has highlighted some serious environmental, human, socioeconomic and cultural as well as legal issues,’’ said Commissioner Dan Lipschultz.

The commission left the door slightly open on seven other alternative routes that Enbridge opposed, some of which don’t go where the company intends to deliver crude oil. Regulators plan to collect more information and public comments about those routes, and decide later whether they could meet the need to transport oil to market.

“We are reasonably pleased,” said Richard Smith, president of the Friends of the Headwaters, a Park Rapids-based group formed last year to oppose the pipeline through that area.

It was a setback for Enbridge, which said all the alternate routes would be longer and more costly and considering them could delay the pipeline by three years. The company had hoped to have it in operation in 2016.

“We need more time to digest the outcome of the proceedings,” Enbridge spokeswoman Lorraine Little said after the decision. “We are open to a process that is efficient and transparent but at the same time keeps the need and purpose of the project at the forefront.”

Enbridge agreed to submit a report on its safety record to an administrative judge who is reviewing the project.

Besides the controversial all-new routes, the commission agreed to study 53 modifications proposed by landowners, environmental groups and others to Enbridge’s preferred route. Enbridge didn’t oppose that process, which is standard in pipeline and transmission projects.

Potentially thousands of people along the alternative southern route now will be contacted, so they know the study is underway and their property might be affected. That route would parallel existing natural gas and petroleum pipelines.

Enbridge’s proposed route for the Sandpiper project takes a Z-shaped path through northern Minnesota. From North Dakota, it runs into Clearbrook, Minn., turns south toward Park Rapids along existing crude oil pipelines, and then east to Superior.

Winona LaDuke, founder of Honor the Earth, an environmental group that opposes Enbridge’s planned route, said it puts at risk her organic wild rice operation on Lower Rice Lake in Clearwater County. “Our water is worth more than their oil,” LaDuke said.

But Kevin Pranis of the Minnesota/North Dakota Laborers’ Union, whose members stand to get jobs on the project, spoke against studying alternatives that “don’t make a lot of sense” because they don’t take oil where Enbridge intends to deliver it.