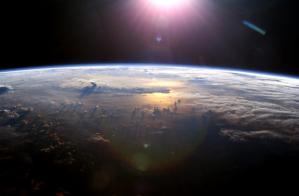 Is the Earth one of many habitable planets in the universe, or are human beings alone, the product of a lucky fluke? Author of “Lucky Planet: Why Earth is Exceptional–and What That Means for Life in the Universe”, David Waltham says it’s more likely the latter, thanks to our planet’s unusually stable climate and early development of life.

But whether Earth’s climate can still said to be “stable” is now, unfortunately, open to question. We humans have have relied far too extensively on fossil fuel burning – especially coal, oil (gasoline, diesel fuel, jet fuel, propane, fuel oil) and natural gas (methane), which all emit greenhouse gases to the atmosphere upon combustion, since the onset of the Industrial Revolution.  What Earth needs now is another kind of revolution, a peaceful revolution, but where humans use their own physical power and the energy of the Sun and the wind and rid themselves from the over-dependence on burning fossil fuels.  Read about a plan to do just that right here and then sign the petition to our elected governmental officials demanding they undertake the necessary changes to make this happen before its too late! Thank you.