Protesters arrested in last month’s demonstration in the heart of Wall Street have appeared in court to a demand a trial. More than 100 people were detained as part of the “Flood Wall Street” action targeting the financial sector’s role in the extractive industries fueling global warming. As the cases were brought to court last 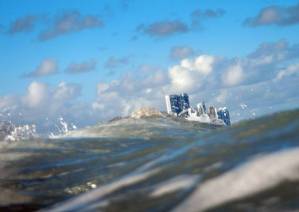 week, a group among those arrested rejected a prosecution offer to dismiss the charges after six months. Instead, the protesters said they want their case to go to trial so they can mount a “necessity defense” — arguing that their actions were justified by how the financial industry worsens the climate change that threatens the planet. Flood Wall Street defendant John Tarleton explained the rationale on Tuesday.

John Tarleton: “Twelve of us have plead not guilty to these charges of disorderly conduct. We want to take the case to trial and argue a ‘necessity defense,’ that the harm being caused by Wall Street in financing all sorts of extreme energy projects in this country and around the world is so much greater than any harm that was done by a traffic jam on Broadway. And we feel that we have to continue to push this point that Wall Street and capitalism in general cannot solve the climate crisis because they are central to the problem.”

The “necessity defense” had been the plan of two climate activists set to go on trial in Massachusetts last month for blocking a coal shipment. But the case was resolved after the prosecutor all but adopted their reasoning and dropped the charges. He then joined them in the People’s Climate March.