Homeless Children in the United States 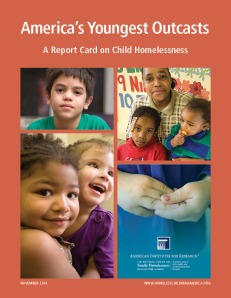 Nelson is considered the founder of “Earth Day” in the U.S. which has been officially recognized and celebrated the week around April 22nd each year since 1970. Of course there are and will be many more hungry and homeless children suffering as oceans rise and global warming worsens. Jackson Browne asks “How Long” must this will go on while we spend trillions of dollars on military expenditures around the world and many more children suffer?

In the United States, one child in every 30 – or 2.5 million children – was homeless in 2013, marking an all-time high, according to a new comprehensive report that blames the country’s high poverty rate and lack of affordable housing, among other causes.

The report, ‘America’s Youngest Outcasts,’ released by the National Center on Family Homelessness was prepared using the “most recent federal data that comprehensively counts homeless children, using more than 30 variables from over a dozen established data sets.”

The 2.5 million figure is based on the US Department of Education’s count of 1.3 million homeless children in public schools, and estimates of homeless preschool children left out of DOE data.

The National Center on Family Homelessness – part of the private, nonprofit American Institutes for Research – said the top causes of youth homelessness include America’s high poverty rate; lack of affordable housing across the US; the lingering ramifications of the Great Recession; racial disparities; high rates of and challenges that come with single parenting; and the manner in which trauma, especially domestic violence, “precede and prolong homelessness for families.”

From 2012 to 2013, child homelessness in the US went up by eight percent overall, as 31 states and the District of Columbia had increases, according to the report.

“The impact of homelessness on the children, especially young children, is devastating and may lead to changes in brain architecture that can interfere with learning, emotional self- regulation, cognitive skills, and social relationships,” the report stated. “The unrelenting stress experienced by the parents, most of whom are women parenting alone, may contribute to residential instability, unemployment, ineffective parenting, and poor health.”

Carmela DeCandia, director of the National Center on Family Homelessness and co-author of the report, said that the federal government has not made the same progress in reducing child homelessness as it has in combating homelessness among veterans and long-term homeless adults.

“The same level of attention and resources has not been targeted to help families and children,” she told AP. “As a society, we’re going to pay a high price, in human and economic terms.”