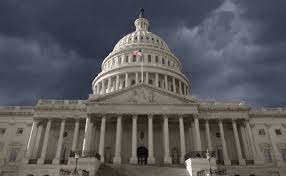 The White House Monday announced new commitments from companies from across the American economy. With this announcement, 81 companies will have signed the American Business Act on Climate Pledge to demonstrate their support for action on climate change and the conclusion of a climate change agreement in Paris that takes a strong step forward toward a low-carbon, sustainable future. The release says the 81 companies who signed the pledge have operations in all 50 states, employ over 9 million people, represent more than $3 trillion in annual revenue, and have a combined market capitalization of over $5 trillion.

From the White House release: By signing the American Business Act on Climate pledge, these companies are:

Voicing support for a strong Paris outcome. The pledge recognizes those countries that have already put forward climate targets, and voices support for a strong outcome in the Paris climate negotiations.
Demonstrating an ongoing commitment to climate action. As part of this initiative, each company is announcing significant pledges to reduce their emissions, increase low-carbon investments, deploy more clean energy, and take other actions to build more sustainable businesses and tackle climate change.

These pledges include ambitious, company-specific goals such as:

The impacts of climate change are already being felt worldwide. Nineteen of the 20 hottest years on record occurred in the past two decades. Countries and communities around the world are already being affected by deeper, more persistent droughts, pounded by more severe weather, inundated by bigger storm surges, and imperiled by more frequent and dangerous wildfires. Rising temperatures can lead to more smog, longer allergy seasons, and an increased incidence of extreme-weather-related injuries, all of which imperil public health, particularly for vulnerable populations like children, the elderly, the sick, the poor, and some communities of color. No corner of the planet and no sector of the global economy will remain unaffected by climate change in the years ahead.

Climate change is a global challenge that demands a global response, and President Obama is committed to leading the fight. The President’s Climate Action Plan, when fully implemented, will cut nearly 6 billion tons of carbon pollution through 2030, an amount equivalent to taking all the cars in the United States off the road for more than 4 years. The Clean Power Plan, the most significant domestic step any President has ever taken to combat climate change, will reduce emissions from the energy sector by 32% by 2030. And while the United States is leading on the international stage and the federal government is doing its part to combat climate change, hundreds of private companies, local governments, and foundations have stepped up to increase energy efficiency, boost low-carbon investing, and make solar energy more accessible to low-income Americans.

The measures taken by the public and private sectors enabled President Obama to set an ambitious but achievable goal of reducing greenhouse gas emissions economy-wide by 26-28% by 2025 last November. And in the eleven months since, we’ve seen unprecedented global momentum in the fight against climate change.

To date, 150 countries representing more than 85% of global carbon emissions have reported post-2020 climate policies to the United Nations. This includes the major economies like the U.S., China, the European Union and India and it includes a large number of smaller economies, developing nations, island states and tropical countries – some of whom are the most vulnerable to the impacts of climate change.

But these submissions are only the beginning of achieving a successful outcome in Paris this December that puts in place a transparent global framework for increasing ambition over time and continuing to drive down emissions over the course of this century. As the world looks toward Paris, President Obama is committed to building on this momentum, with American leadership at all levels – the federal government, state and local governments and the private sector.

Additionally, leading up to the White House Clean Energy Investment Summit on June 16, 2015, an independent consortium of long-term investors (“LTIs”), including sovereign development funds, pension funds, endowments, family offices, and foundations, committed to building a new investment intermediary that will identify, screen, and assess high-potential companies and projects for commercial investment that could also produce impactful and profitable solutions to climate change.

The consortium announced its founding CEO, interim board of directors, sponsors, and confirms the intention of the LTIs to deploy at least $1.2 billion of investment capital through an ‘aligned intermediary’, which they anticipate will be formally launched and branded in mid-2016.

The initial group of LTIs announcing financial commitments to work with the ‘aligned intermediary’ includes:

As President Obama said at the U.N. Climate Summit last September, “There’s one issue that will define the contours of this century more dramatically than any other, and that is the urgent and growing threat of a changing climate.” The American Business Act on Climate Pledge shows that the U.S. private sector, with its history of innovation and ingenuity, is committed to stepping up and doing its part in taking on this global challenge.

We applaud the growing number of countries that have already set ambitious targets for climate action. In this context, we support the conclusion of a climate change agreement in Paris that takes a strong step forward toward a low-carbon, sustainable future.

We recognize that delaying action on climate change will be costly in economic and human terms, while accelerating the transition to a low-carbon economy will produce multiple benefits with regard to sustainable economic growth, public health, resilience to natural disasters, and the health of the global environment.

The following companies have joined the pledge and their detailed commitments can be viewed at: