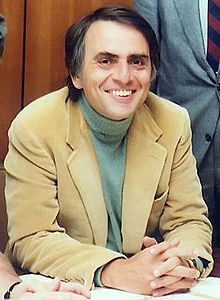 The world renown American science communicator in astronomy and other natural sciences, and author of the book Pale Blue Dot: A Vision of the Human Future in Space, Carl Sagan, was born November 9, 1934, in Brooklyn, New York. The book examines the claims made throughout history that Earth and the human species are unique.

He published more than 600 scientific papers and articles and was author, co-author or editor of more than 20 books. He

co-wrote the award-winning 1980 television series Cosmos: A Personal Voyage. The most widely-watched series in the history of American public television, Cosmos has been seen by at least 500 million people across 60 different countries. The book Cosmos was published to accompany the series. Sagan died of pneumonia at the age of 62 on December 20, 1996.

John Lennon was a peace activist and leader of the 1960’s to early 1970’s rock band “The Beatles”. After The Beatles broke up, Lennon continued writing and recording songs including such notable songs as “Give Peace a Chance”, “Power to the People” and “Imagine”.

John Lennon was shot dead by a deranged fan in the archway of the building where he lived in New York City on 8 December 1980. He had just returned from the recording studio with his wife, Yoko Ono. He was just 40 years old. Had he lived, he would have been 75 years old this year..

His voice became famous outside Hawaii when his album Facing Future was released in 1993. His songs include “Somewhere Over the Rainbow” and “What a Wonderful World”.