All Wisconsinites Have Opportunity to Speak Truth to Power on TOO MUCH MONEY in U.S. Politics Starting at 10:00 am in the North Public Hearing Room on the 2nd Floor of the State Capitol Building TODAY on the 6th Year Anniversary of the U.S. Supreme Court’s “Citizens United” Decision

Citizens United v. Federal Election Commission, No. 08-205, 558 U.S. 310 (2010), is a U.S. constitutional law case dealing with the regulation of campaign spending by organizations. The United States Supreme Court rendered a decision on January 21, 2010, that concluded the First Amendment to the U.S. Constitution prohibited government from restricting independent political expenditures by corporations and other such associations.

The decision is said to have undermined the integrity of public officials in the eyes of the public by allowing billionaires and wealthy special interests to drown out any concerns of individual voters. 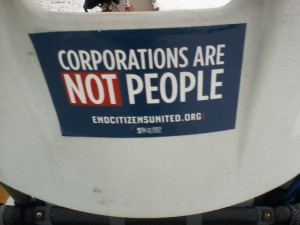 Any and all residents of Wisconsin are urged to attend today’s public telling and voice their concerns about the corrupting influence of big money politics on Wisconsin’s state lawmakers, Governor Scott Walker, the U.S. Congress and President of the United States.