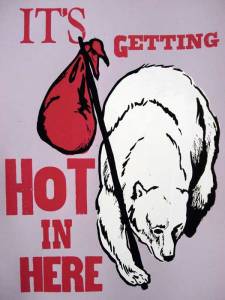 While Wisconsin Governor Scott Walker and his fellow Republicans in the state Legislature, the U.S. Congress, republican governors other U.S. states, plus the president himself, continue to not blame human activities fueled by fossil fuel burning as the cause of the currently accelerating rates of global temperature rises, the record high rates of sea level rise, the acidifying of the planet’s oceans, along with the famine refuge causing droughts in Africa and the Middle East, and the historic melting of ice and snow at the poles and the relentlessly melting of mountainous glaciers, caused mostly by:

excavating, processing and transporting coal, natural gas, auto, truck and ship motor fuels, jet fuel, especially fuels derived from processing and delivering Alberta, Canada, tar sands) and many other human activities that result in large scale emissions of  greenhouse gas emissions: cement making, paving forests, meat production, poor waste disposal practices, sports competitions which require long distance travel by teams and fans and awards ceremonies, conventions and conferences that require people to travel long distances,  and buying products from long distance markets (requiring distance travel (i.e., not buying local, … the continuing of  what the global warming scientists determined to be the “business as usual” practices (above) is slowly but increasing getting worse and worse – with no end in site.  Today’s children and those yet to be born will curse us all for this. Mark my words.

Snow is now gone from most areas of the state, with the exception of the far north, where a few inches remain in wooded areas. Very strong winds this week have taken ice out of many lakes in the south, including Monona and Mendota, which tied its record for second earliest opening — nearly a month earlier than average.

The high winds and loss of snow cover have also led to an early spring wildfire season, with more than 30 acres burning this week, including one fire near Eau Claire that resulted in the evacuation of some homes, but was contained before it burned any structures….