Planet Earth Closer to Nuclear Annihilation than Ever Before 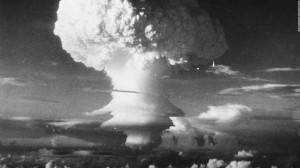 Thanks to boisterous words spoken by the President of the United States of America to the United Nations Assembly (whole World) 2017 September 19, many are saying Earth is closer to total annihilation NOW, either by nuclear warfare or, ultimately, by GLOBAL WARMING, (due primarily to a TOO THICK accumulation of GREENHOUSE GASES in its atmosphere, and originating from its HUMAN POPULATION burning WAY TOO MUCH  FOSSIL FUEL, and paving away WAY TOO MUCH of its carbon sequestering surface vegetation in the last 150 years) — that its surface temperature WILL EXCEED the level required for sustaining life.

I Want to Live

After the Garden is Gone