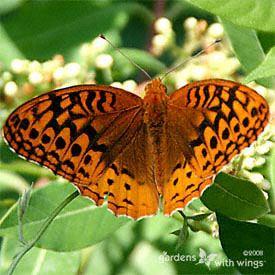 The Great Spangled Fritylery (above) is a medium sized butterfly that can fly very quickly and is easy to see while nectaring. They enjoy grassy, prairie areas that have a water source close and the caterpillars feed on Violets, so a partially shaded area will be beneficial for this winged beauty. 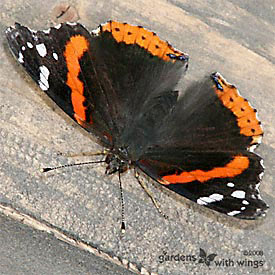 The Red Admiral is an admired butterfly, popular in much of North America, Asia, and Europe. This butterfly enjoys many types of environments and has a strong affinity to flowers. The males are territorial and many times can be found in the same location day to day. The undersides of the wings are a mottled brown and tan with a curved bright red color on the upper side of the brown/black wings. Although a quick flier, this beauty is a more docile butterfly, it tends to be a friendly visitor in gardens. 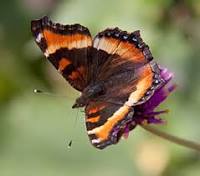 Milbert’s Tortoiseshell is a swift-flying butterfly that is always a pleasure to see. This butterfly varies widely in abundance from year to year.

The Red-spotted Purple is a common butterfly in the southern half of Wisconsin. Throughout central Wisconsin, this subspecies and the White Admiral are both present, and sometimes they hybridize. The offspring can have characteristics anywhere between the two subspecies. This butterfly is often found taking nutrients from gravel roads, roadsides, or scat. 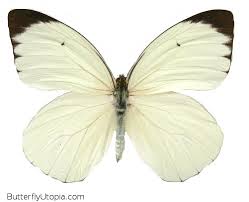 One of the most common butterflies seen flying around urban and suburban America is the cabbage White. More often than not, it is the white butterfly flying around your yard. Cabbage whites use a variety of mustards as larval host plants from leafy garden vegetables such as broccoli, cauliflower, and cabbage to weeds such as london rocket, flixweed, garlic mustard, and whitetop.

The monarch butterfly may be the most familiar North American butterfly. Its wings feature an easily recognizable orange and black pattern, with a wingspan of 8.9–10.2 cm(3½–4 in).

The eastern North American monarch population is notable for its annual southward late-summer/autumn migration from the United States and southern Canada to Mexico. During the fall migration, it covers thousands of miles, with a corresponding multi-generational return North. The western North American population of monarchs west of the Rocky Mountains most often migrate to sites in California but have been found in overwintering Mexico sites.

The (Eastern) Black Swallowtail is found throughout much of North America. They are usually found in open areas like fields, parks, marshes or deserts, and they prefer tropical or temperate habitats. Black swallowtails rely on a variety of herbs in the carrot family. Species of host plants include Mock bishopweed, Roughfruit scaleseed, Spotted water hemlock, Water cowbane, Wedgeleaf eryngo, Canby’s dropwort, Queen Anne’s lace and Dill. 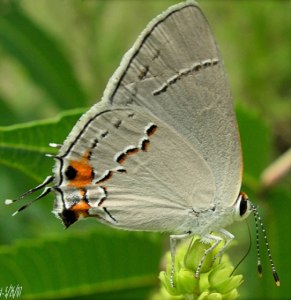 The Gray Hairstreak (Strymon melinus) is one of the most common hairstreaks in North America, ranging over nearly the entire continent. It occurs also throughout Central America and in northern South America. Its larvae feed on the fruits and flowers of a variety of host plants including several species mallows, members of the pea family, buckwheats, clovers, and many other plants.