A Record 988 Billion Miles Driven on U.S. Highways During First Four Months of 2015 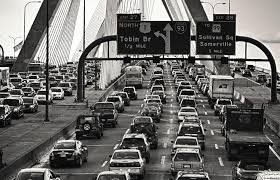 Data from the U.S. Federal Highway Administration show Americans drove a record 988 billion miles during the first four months of 2015. Motor gasoline consumption, which rose by 80,000 barrels per day in 2014, will increase by a projected 170,000 barrels per day (1.9%) in 2015 as the effects of employment growth and lower gasoline prices outweigh increases in vehicle fleet efficiency.

Demand for automotive-grade gasoline increased to 9.17 million barrels (385.14 million gallons) per day, according to information from the Energy Information Administration (EIA).

The Energy Information Administration estimates that for each gallon of gasoline burned in an internal combustion engine, 19.564 pounds of carbon dioxide (CO2) are emitted to the atmosphere, as well as smaller amounts of nitrous oxide and other gases. This calculates to 7.7 billion pounds CO2 per day from U.S. drivers. Carbon dioxide remains in the atmosphere from year to year, building to higher and higher levels of concentration, which is known to be causing warmer temperatures at lower altitudes, warmer ocean surface temperatures. In Wisconsin, nightly low temperatures have increased the most, as reported by the Weather Guys.

Yet nationally, only 63% of U.S. citizens believe global warming is occurring!