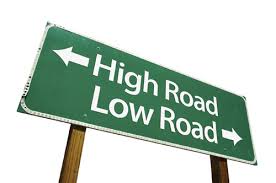 Wisconsin Governor Scott Walker’s proposed borrowing plan for highway construction the next two years has finally hit the skids! GOP lawmakers said as much in a letter to the governor yesterday. Not only is the governor’s proposed $1.3 billion transportation borrowing plan too high, said the 33 Assembly Republicans who signed the letter, but also any reduction to $800 million must include reductions in the massive Milwaukee area freeway projects already under construction.

The Republicans lawmakers, who are in the majority in both houses of the Wisconsin Legislature, are negotiating among themselves over the reduction in bonding to $800 million according to a story in the Milwaukee Journal Sentinel website Monday.

Bad things can happen to good people. It happens all the time, and has occurred all throughout history. So when bad things, or threats, are predicted to occur or seem reasonably likely to occur, it’s best for one to take action, and involve others in removing the oncoming threat, before it gets realized and significant damage to life and our environment occurs.
Governor Walker’s biennial budget plan for Wisconsin for the next two years contains numerous threats to the people of Wisconsin and the state of Wisconsin’s natural resources. Some of those threats could have devastating and harmful impacts if they are allowed to occur without any attempts to prevent or ameliorate them.
Governor Walker’s budget plan as written will cause a great deal of harm for many thousands of Wisconsin’s people and their families. Some people who have worked their entire life at University of Wisconsin or UW-extension will likely lose their jobs, and the public who those people serve will lose out as well. Wisconsin’s elderly and disabled population, and families having children enrolled in Wisconsin’s excellent public school system will also suffer loses. Many hard working and dedicated school teachers and educational assistants serving special needs children will be without a job next fall if this budget is not revamped.
The governor’s budget also hurts those who watch over and protect our precious natural resources, both now and in the coming years, by cutting positions and land stewardship funds.
But really the worst thing about the governor’s budget is not what’s in it but rather what’s NOT IN IT BUT SHOULD IN IT. For example, despite Wisconsin’s aging population and increasing number of people who prefer not to drive, or who can’t drive because of the high cost of owning, maintaining and driving an automobile, the Walker budget proposes nothing new to help with mobility in the state, transit in particular. Rather, it borrows hundreds of millions of dollars to expand an already too large highway system at great environmental harm to the state, and for no good reason.
Numerous observations demonstrate that the climate of the Great Lakes Region, including Wisconsin’s climate, is changing. Average temperatures are getting warmer and extreme heat events are occurring more frequently. Total precipitation is increasing and heavy precipitation events are becoming more common. Winters are getting shorter and the duration of lake ice cover is decreasing over time. As a state, we should already be doing as much as we can to drastically cut back on our burning of fossil fuels but we seem to be doing almost the opposite. This tragedy grows in magnitude the longer it takes for our country and other countries to wean themselves off burning fossil fuels. There are many other unintended consequences of living in a fossil fuel burning dependent society.
But ironically, rather than then increasing substantially the funding of transit systems and the funding of positive financial incentive programs aimed at reducing greenhouse gas emissions and encourage walking and use of nonmotorized travel by state residents and businesses, the governor’s budget promotes more highway expansion.  Instead, the state should reward those who drive less (miles), don’t fly, and minimizing their use of fossil fuel derived energy over the year. Use the money that Governor Walker’s budget borrows to fund a bigger highway system and a big new professional basketball arena instead – expenditures that not only subject state taxpayer to great financial risks but also promote adding millions more tons of greenhouse gases to the atmosphere including promoting jet airplanes flying of visiting teams and fans to the games.
Wisconsin Public Radio (part of state’s UW-extension) plans vacationing trips to Scotland and Australia, trips that not only release hundreds of millions of tons of greenhouse gases to the atmosphere but also give nothing back to the state’s own tourism businesses.
Governor Walker’s budgets include more trade promotions with foreign countries despite the fact that shipping products and working with foreign business interests similarly add millions and millions more tons of greenhouse gases to the atmosphere.
My plan would increase Wisconsin families’ and individuals’ annual income for polluting less and reducing the global warming threat, rather than adding to it.
Governor Walker’s plan is to require a monthly drug test of food share (too low to begin with) recipients and proof of their having worked at least 80 hours at a place of employment before their receiving the meager food share benefits. It would do nothing to curb the rising income and employment inequalities and racial disparities in the state. The numbers of families and children living in poverty already will not be helped by Governor Walker’s budget. It is a fact that children of families living in poverty start their lives with a handicap because of many reason but the worst is that they do not receive adequate nutrition before and after they enter their school years. The governor’s budget insufficiently funds Wisconsin public schools and the families that live in poverty are disadvantaged in those schools from day one. Yet the governor’s budget does nothing to make up for previous cuts to public schools and add more financial stress for them by requiring them to pay vouchers for children attending private schools.
The budget should also refund the planned parenthood clinics the state had before Scott Walker took office. Certainly we ought not be adding to our human population pressures on the environment if we don’t have to.
Thank for the opportunity to submit my comments on the proposed state budget. For addition background on my concerns expressed here, please visit my blog at: www.allthingsenvironmental.com.

So it’s not just the governor’s highway plan part of the 2-year budget that’s unsustainable. It’s virtually everything Scott Walker has done as governor, starting January 2010 with his Act 10 that destroyed collective bargaining in public employee unions, having appeared out of the blue.

Meanwhile, as probable presidential candidate Scot Walker heads his way to yet another Wisconsin taxpayer funded speaking engagement, this time in California, the brewhaha simmering among his fellow Republicans is beginning to reach the boiling point. One has to wonder how many frequent flyer miles the governor and his security people have racked up over the past 5 years? A lot? Yes, but undoubtedly not even close to the millions of tons of greenhouse gases his jets, autos and motorcycles have emitted to the atmosphere for the next generation to be burdened with.

The global warming genie has escaped his bottle! He has begun to show his wrath, which is only likely to worsen in the coming years, decades and centuries, and there is presently no end in sight!

He’s leaving plenty of evidence. The only way we can all help weaken him is by stopping our nonessential burning of fossil fuels, stopping deforestation especially of the tropics, and doing things which naturally result in more greenhouse gases being added into the earth’s atmosphere and oceans (such as overeating, wasting food, not recycling, not reusing things whenever possible, running our air conditioning and furnaces needlessly, using energy derived from tar sands industry, doing other things that frivolously burn fossil fuels such as going for joy rides, cruising, etc.. Because our atmosphere is where Global Warming lives and breathes (now that he’s escaped the bottle) and because he gets his tremendous strength to wreak havoc on the world by his breathing in greenhouse gases that have been accumulating to record high concentrations in the earth’s atmosphere (as a by-product of our burning carbon-based fuels in our cars, trucks, airplanes, power plants, ships, boats, trains, machinery, recreational products and the like) we need to all put him on a crash diet, NOW!

According to David Owen, author of Green Metropolis and The Conundrum: How Scientific Innovation, Increased Efficiency, and Good Intentions Can Make Our Energy and Climate Problems Worse, the proportional share of the fuel burned during a round trip from New York City to Melbourne, Australia, is greater than the total amount of energy that the average resident of the earth uses, for all purposes, in a year. Forestalling global calamity is a preemptively worthy, ethically justifiable and economically achievable goal for everyone on the planet, especially in this era of television, radio, computers, Skype, the iPhone and virtual reality. Climatologists, environmentalists, CEOs, religious leaders, students and tourists seeking entertainment or to broaden their horizons, and government officials ought use the least greenhouse gas emitting technologies available to them to accomplish their objectives; they should not  have to cross the oceans and great land masses of world (requiring vast burning fossil fuels) just to be present in person. Likewise, our government leaders and business people ought minimize the amount of products traded with distant countries, so as to minimize the amount of fuel burning required in the shipment of goods by air, sea and over miles and miles of terrain. Transportation of billions of tons of goods along with extensive long distance vacationing and business trips by millions of people every year is simply no longer sustainable. Such activities are becoming ethically wrong because they are unquestionably harming the planet and all the living things it is home to, both now and in the future.

We cannot and must not wait for technology to bail us out. Scientists the world over say it is now paramount that all humans begin acting in significant ways to reduce their annual greenhouse gas emissions.   Otherwise, we will never get Global Warming to go back into his bottle – where he belongs! Greenhouse gases accumulate atmospherically over time – they build up in the atmosphere and oceans from year to year. Their volume is accelerating in earth’s atmosphere and as well as in its oceans, and the total volume will likely keep accelerating for some time due to compounding factors (positive feedbacks) of the earth’s natural systems. That’s why it’s of the utmost importance – paramount – that everyone act in ways to reduce their annual carbon footprint, immediately, before Global Warming becomes all to powerful, uncontrollable and for generations, a tragedy for civilization.

The Public Service Commission of Wisconsin is holding technical hearings this week in Madison as they assess the need and impact of the American Transmission Company (ATC) LLC and Northern States Power Company ‘s joint application to construct and operate a high voltage 345 kV electricity transmission line called Badger-Coulee line from the La Crosse area in Lacrosse County to the greater Madison area in Dane County, Wisconsin.

The Wisconsin Public Service Commission (PSC) will determine whether and where American Transmission Company (ATC) and Xcel Energy may build the line, which could encroach on as many as 556 residences, as well as forest and public lands. The transmission line is expected to cost up to $580 million.

Opponents of the project say the project is not needed and and that it would allow utilities to profit by trading energy while discouraging more cost-effective alternatives such as energy efficiency and solar power.

The PSC held five public hearings in December with the majority of those speaking voicing opposition to the project.

At the technical hearings this week, commissioners are hearing from the applicants, the PSC’s professional staff, and 25 registered intervenors.

The 3-member commission, with 2 of the 3 of the commissioners having been appointed by Governor Walker, is expected to issue a final decision in April, 2015.