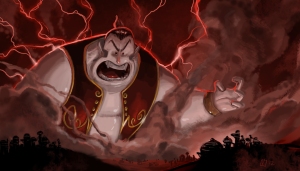 The global warming genie has escaped his bottle! He has begun to show his wrath, which is only likely to worsen in the coming years, decades and centuries, and there is presently no end in sight!

He’s leaving plenty of evidence. The only way we can all help weaken him is by stopping our nonessential burning of fossil fuels, stopping deforestation especially of the tropics, and doing things which naturally result in more greenhouse gases being added into the earth’s atmosphere and oceans (such as overeating, wasting food, not recycling, not reusing things whenever possible, running our air conditioning and furnaces needlessly, using energy derived from tar sands industry, doing other things that frivolously burn fossil fuels such as going for joy rides, cruising, etc.. Because our atmosphere is where Global Warming lives and breathes (now that he’s escaped the bottle) and because he gets his tremendous strength to wreak havoc on the world by his breathing in greenhouse gases that have been accumulating to record high concentrations in the earth’s atmosphere (as a by-product of our burning carbon-based fuels in our cars, trucks, airplanes, power plants, ships, boats, trains, machinery, recreational products and the like) we need to all put him on a crash diet, NOW!

According to David Owen, author of Green Metropolis and The Conundrum: How Scientific Innovation, Increased Efficiency, and Good Intentions Can Make Our Energy and Climate Problems Worse, the proportional share of the fuel burned during a round trip from New York City to Melbourne, Australia, is greater than the total amount of energy that the average resident of the earth uses, for all purposes, in a year. Forestalling global calamity is a preemptively worthy, ethically justifiable and economically achievable goal for everyone on the planet, especially in this era of television, radio, computers, Skype, the iPhone and virtual reality. Climatologists, environmentalists, CEOs, religious leaders, students and tourists seeking entertainment or to broaden their horizons, and government officials ought use the least greenhouse gas emitting technologies available to them to accomplish their objectives; they should not  have to cross the oceans and great land masses of world (requiring vast burning fossil fuels) just to be present in person. Likewise, our government leaders and business people ought minimize the amount of products traded with distant countries, so as to minimize the amount of fuel burning required in the shipment of goods by air, sea and over miles and miles of terrain. Transportation of billions of tons of goods along with extensive long distance vacationing and business trips by millions of people every year is simply no longer sustainable. Such activities are becoming ethically wrong because they are unquestionably harming the planet and all the living things it is home to, both now and in the future.

We cannot and must not wait for technology to bail us out. Scientists the world over say it is now paramount that all humans begin acting in significant ways to reduce their annual greenhouse gas emissions.   Otherwise, we will never get Global Warming to go back into his bottle – where he belongs! Greenhouse gases accumulate atmospherically over time – they build up in the atmosphere and oceans from year to year. Their volume is accelerating in earth’s atmosphere and as well as in its oceans, and the total volume will likely keep accelerating for some time due to compounding factors (positive feedbacks) of the earth’s natural systems. That’s why it’s of the utmost importance – paramount – that everyone act in ways to reduce their annual carbon footprint, immediately, before Global Warming becomes all to powerful, uncontrollable and for generations, a tragedy for civilization.